The Effects of Wildfire Smoke on our PNW Horses 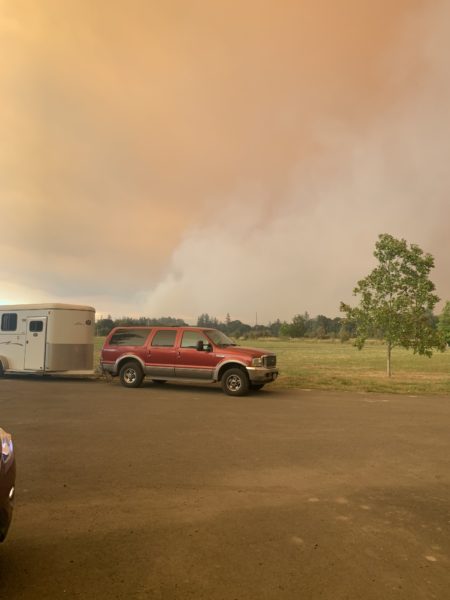 In the aftermath of the 2020 Wildfires, horse owners were stuck trying to figure out how best to support their horses. As an Oregonian living in the Willamette Valley, fires and evacuations were not something we were used to, nor being blanketed with thick smoke for weeks at a time. Vets weren’t sure what the long-term health outcomes would be and said it could even take up to a year or more to see if horses had sustained lung damage. The 2021 fire season wasn’t much better; even if people were lucky enough to avoid evacuations, the smoke rolling in was a constant throughout the summer. This past summer and heading into fall, we saw a lot of health issues with the horses. More coughing, allergies, mystery illnesses – which leads to the question, “Could these issues be due to exposure to all the smoke and particulate matter in the air during the fire seasons?”

We have been experiencing more seasonal allergies and coughing in some horses in my boarding barn and, more recently, a respiratory virus puzzling the vets. All tests and nasal swabs came back negative, blood work showed anemia, and a secondary opportunistic bacterial sinus infection came in. Symptoms are a persistent cough, lethargy, disinterest in food – as soon as a nasal discharge becomes present, fevers begin to spike. Out of 13 horses, three have come down with the virus, and one horse experienced severe allergies during the summer months and was administered a long course of steroids. Does it lead to the question has prolonged exposure to wildfire smoke caused susceptibility to these opportunistic infections?

Smoke from wildfires can cause serious health problems as smoke contains toxic chemicals and small particles that can irritate the eyes and respiratory tract. Horses have an enormous lung capacity and move a lot of air into and out of their lungs. The tiny particles in smoke can travel into the lungs and settle there, causing damage to tissues and negatively affecting the health and performance of the horse. Since the damage from smoke compromises the lungs, it makes the horse more sensitive to the inflammatory effects of bacteria and pollen. Further, it aggravates symptoms in horses with preexisting asthma.

Some Veterinarian recommendations to support horses exposed to smoke:

– Microcurrent – Microcurrent Therapy has helped manage respiratory conditions for decades. Anything from a runny nose, cough, recovering from illness or improving lung function. Studies on micro-amperage have shown that it promotes the increased production of ATP (adenosine triphosphate) by 500%. This increased cellular energy boosts the body’s self-healing mechanisms.

– VibraVM – Improves sinus and lung function: The VibraVM is a specialized device for all things respiratory. The VibraVM delivers sound waves with specific frequency ranges to reduce inflammation in all airway passages and clears the mucus from the lungs and sinuses.

– When exposed to wildfire smoke (under stress/ill/coughing or breathing difficulties) – 1/2x per day until you see the relief of symptoms.

– For Horses with Heaves/COPD or Asthma, recommended treatment – 3x/week up to days depending on the severity of symptoms.