The Nebulizer vs the Vibra VM:  A Review of  COPD Devices for horses (and other animals)

A Nebulizer is primarily a drug delivery device used to administer liquid medication into an extremely fine vapor to be inhaled by the horse to go directly into the lungs. Nebulizers are commonly used for horses with COPD and a variety of other respiratory diseases. Substitutes for medications are saline solutions and Chelated Silver. Setup and administrating time will vary by manufacturer.  Average overall time is 15-30 minutes. 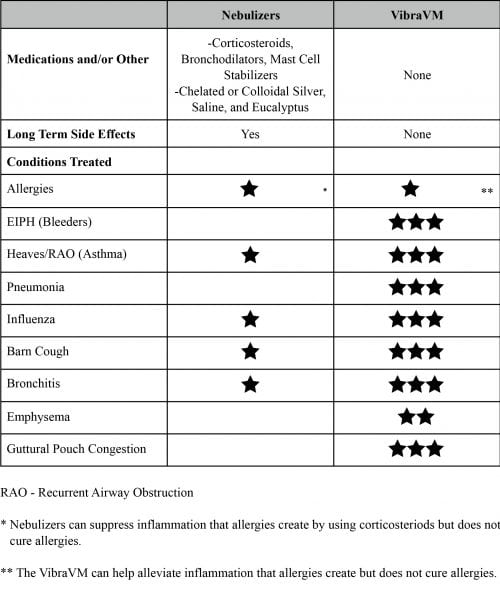 Cons: Risk of laminitis or founder when potent steroids are used at high dosages over extended periods of time. Not intended for long term control. Side effects also include enzyme elevation, weight loss, drowsiness and lethargy.

Cons: Very short duration of action, high incidence of side effects to the central nervous system. Increased heart rate, excitement, trembling, sweating are some side effects. Colic may also result from the slowing of the gastrointestinal tract. The are used as a rescue therapy and are not intended for long term control, loose their efficacy over time.

Cons: Very little information about the use of Mast Cell Stabilizers in horses including what the potential side effects may be. In people, Mast Cell Stabilizers are not used to relieve symptoms for those who have moderate to severe respiratory conditions. So in a horse that has severe and/or chronic conditions this isn’t always the best course of action. The side effects in people include throat irritation, coughing, nausea, heartburn or abdominal pain.

Chelated Silver – Silver has started being used in nebulizers as a form of treatment because of its antimicrobial effects.

Cons: The use of chelated silver with nebulizers is still fairly new and there are not many clinical studies out that show what long term side effects of inhaling minute silver particles into the soft tissue of the lungs might be.  In a 2008 study healthy laboratory rats were used to look at the effects of inhaling silver into the lungs daily for extended periods of time. The first study lasted 28 days and concluded that there were no significant long-term effects to the lab rats. However, the second study was done on healthy rats over a period of 90 days and it found that higher doses of silver over longer periods of time caused significant negative results including chronic inflammation of the alveolar, which are the delicate air sacs that are deep within the lungs where oxygen is taken into the bloodstream. It was also observed that there was an increase in inflamed cells, as well as silver nanoparticles accumulated in the lungs and liver of the rats. More research is nee

Con: Can be iritating to already inflamed passage ways. 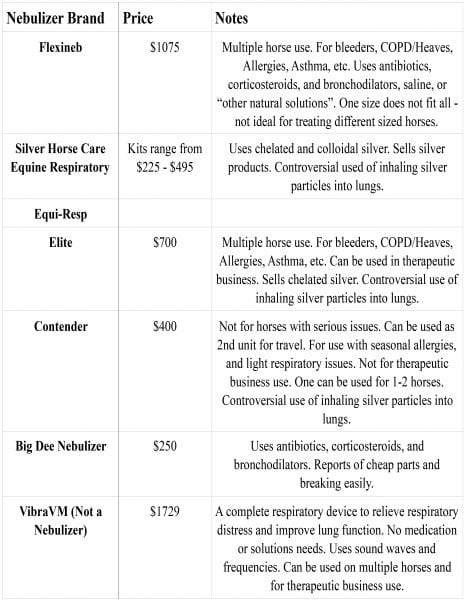 The VibraVM acoustic airway clearing device is used for the clearance of mucus in the lungs and  airway of horses with obstructive and mucus producing respiratory symptoms. It is a completely drug free device that delivers only sounds waves to the respiratory system. It relaxes the airway muscles, opening them for increased airflow and vibrating the mucus lodged in the bronchial tubes causing the mucus to liquify and break away.

It is designed to be used with large and small animals. Each session is six to eight minutes long.

The VibraVM will treat many respiratory conditions beyond COPD  and disease symptoms, including: COPD (Emphysema & Bronchitis), Heaves (ROA), Chronic Barn Cough, Guttural Pouch Congestion.  Additional there has been reported benefit for Bleeders (EIPH) by assisting with the breakup of dried blood pooling in the lower cavities of the lungs. Horses with Influenza and Pneumonia have also reported faster recovery.

Setup and administrating time for the Vibra VM is approx 6- 20 minutes.